(Disclaimer: The following experiments do not constitute rigorous peer review, but rather illustrate typical yields obtained and observations gleaned by trained synthetic chemists attempting to reproduce literature procedures. We've taken efforts to stay close to the original procedure, using similar glassware, equipment, and reagents wherever possible. Images have been cropped and scaled to fit in the allotted space, but have not been digitally altered otherwise.)


It's been a wild month since our post concerning IBX-promoted benzylic oxidation. This piece provoked energetic discussion, evidenced by >200 comments (and counting!) between Blog Syn, two Pipeline posts, and Rich Apodaca's insightful discussion at Depth First.

Before we wrap up this topic, we at Blog Syn first wish to thank Prof. Phil Baran, Dr. Tamsyn Montagnon, and Dr. Yong-Li Zhong (the original authors) for engaging us honestly and professionally, and helping uncover some of the hidden factors that make this reaction work.

I think we now know the most important one: water.

After reading Tamsyn and Phil's submissions to #003, we were puzzled: what was so different about our reaction conditions? Everyone was following the same procedure  [Santagostino, J. Org. Chem. 1999, 64(12), 4537] to make their IBX...right?

Well, not really. No one's published the actual NMR spectrum for IBX in quite some time. Neither this paper, nor Kirsch OL 2006, nor JOC 1999[1], nor Tet. Lett. 1994 (which the JOC refers back to) do much more than provide a list of peaks. This next image shows the NMR spectra provided by Phil, Tamsyn, and by an anonymous commenter online at Blog Syn. Note the rather large water peak at 3.4 ppm (possibly from some pre-opened d6-DMSO?) 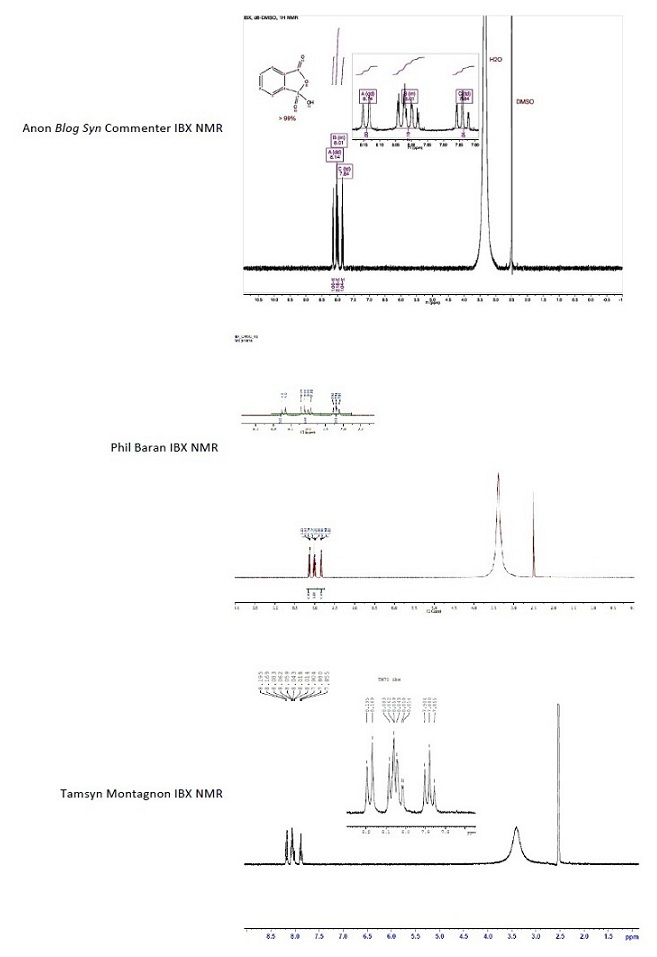 Next, I made some fresh IBX strictly following the JOC 1999 paper, which includes two acetone washes to dry the IBX. The small bump at 8.4 ppm, which we had believed to be an impurity, might actually be the OH proton of non-solvated IBX. Note that, as I titrate in additional H2O  the bump disappears, the aromatics shift and coalesce, and the 'signature' water peak grows in at 3.4 ppm! 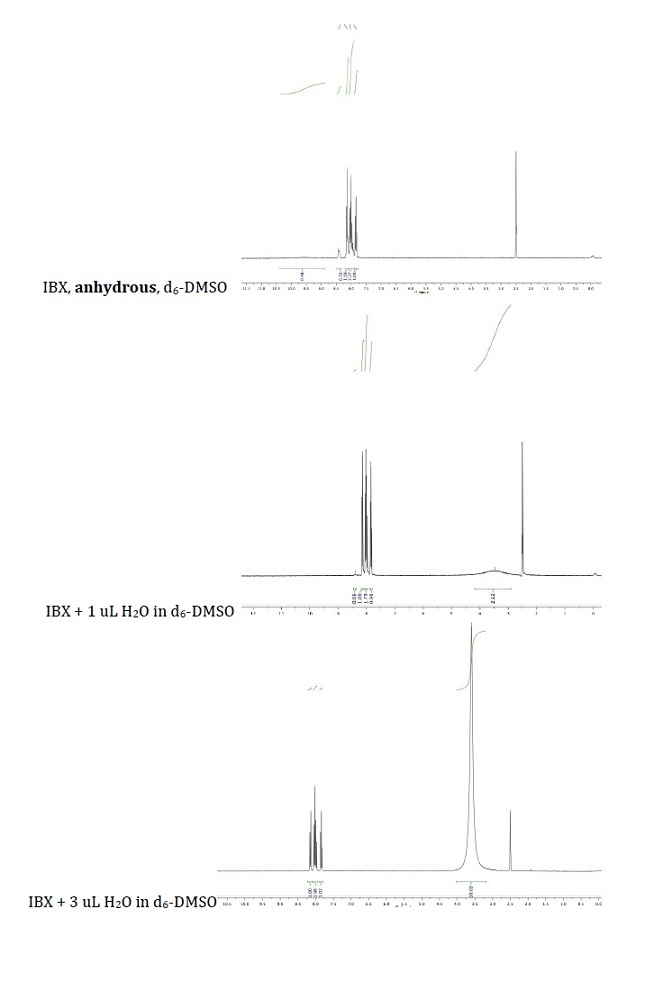 After discussion with the Blog Syn crew and the authors, we propose "hydrated IBX" may be the active species for the oxidation:

Co-author Yong-Li suggested some 18O-labeled experiments to determine water's role in the reaction. Sadly, we're not equipped for this type of chemistry, but if any readers are, please feel free to report your findings!

Here's a (straight-baseline) TLC; runs "A" and "B" have varying [H2O] in the solvent, which does seem to accelerate the reaction (right). Prof. Nicolaou had remarked on this trend in the Details of ACIEE 2002, 993 (see p. 996) noting that enone dehydrogenation yields decreased when solvent was pre-dried over 4A sieves.

Using "wet" DMSO and fluorobenzene (5:1), and heating to 95 deg C in a foil-coated, fully-submerged screwtop vial, I'm now able to convert 2-methylnaphthalene to naphthaldehyde in 52% yield (brsm). My colleagues have also observed increased conversion of toluene and 4-bromotoluene, but neither go to completion by the published time points.


So, what should we recommend? It seems clear that several critical details are missing from the original Supporting Info. How much have we deviated from the initial conditions? 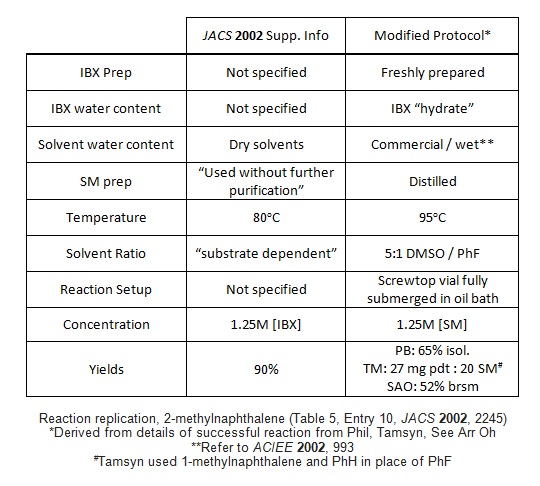 Based on the information above, and the results in our hands over multiple runs, we will change our recommendation to Reproducible with optimization.

We look forward to future communication with all authors involved, and hope that this interchange inspires chemists to have another look at IBX-promoted oxidation reactions...just add water!

[1] We should point out that JOC 1999 does include KF titration values, but the low water % detected does not rule out sufficient hydration of some IBX. Note also that the elemental analysis values deviate enough to include trace water.
Posted by See Arr Oh at 2:18 PM